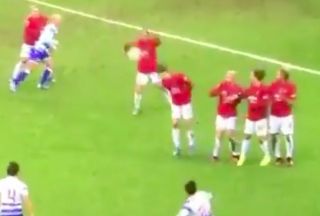 Manchester United Women were denied a victory in the Women’s Super League this afternoon due to an incredible handball decision.

United midfielder Katie Zelem was adjudged to have handled the ball in the box from a free-kick, despite the fact she quite clearly headed away from danger.

The outrageous decision cost Casey Stoney’s side dearly as Farah Williams converted the penalty in the closing stages to make the game level.

Stoney’s side remain 4th in the Women’s Super League having played in twelve matches.

We can only imagine the outrage if this penalty was awarded in the top-flight of the men’s game, although it is clear that the decision would have been overturned by VAR.

See the shocking refereeing decision below.

Ref watch….now this is pathetic.
This is apparently a hand ball by @katiezel according to the ref pic.twitter.com/juD3uMpIaA