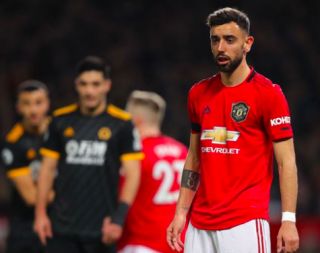 The Portugal midfielder made his long awaited first appearance in a red shirt in the dull 0-0 draw against Wolves at Old Trafford.

Fernandes failed to provide the decisive moment in the game, but impressed in large periods for his tidiness on the ball and threat   when shooting from distance.

But United legend Giggs thinks Ole Gunnar Solskjaer will soon have to work out the best position for his new signing, and believes issues could arise if he operates in a defensive role.

“[You saw] glimpses of the quality he does possess,” Giggs told Premier League Productions.

“I think it might need a bit of working out what his best position is.

“With his back to goal, I don’t think that’s his position. When he’s a little bit deeper, defensively, he may be a bit of a liability. He’s in between the two really.

“That’s where you want to see him, coming on to the ball [heading into the final third].

“But also you see when he is that little bit deeper he can spray the passes, he has got the vision to then play those passes. But then you need the runs.”

We feel Fernandes should operate in the number 10 role in Solskjaer’s preferred 4-2-3-1 system.

He offers far more quality going forward than other options Jesse Lingard and Andreas Pereira, and looked most likely to create anything against Wolves.

United fans will next get the chance to see their new midfielder play against Chelsea at Stamford Bridge on 17th February.