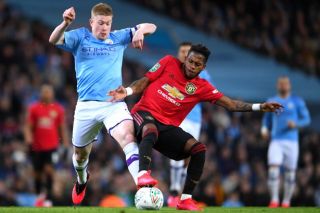 Fred earned his first player of the month award on Saturday after enough impressive run of performances in January.

The Brazilian midfielder beat Nemanja Matic, Harry Maguire and Brandon Williams to the award which was voted for by United fans.

Since getting a consistent run in the United side, Fred has been constant improving and played in all nine matches across January.

READ MORE: ‘Dream come true’: Odion Ighalo explains what it feels like to be a Man Utd player

In Paul Pogba and Scott McTominay’s absence through injury, Fred has established himself as a first team regular and is relied on by Solskjaer as a box-to-box midfielder.

United’s midfield has looked solid, if not threatening in a creative sense with a pivot of the 26-year-old and Nemanja Matic.

We hope his relentless running and desire to retrieve the ball can now be rewarded with more goals for United with Bruno Fernandes starting just ahead of him.

United’s new signing made his debut alongside Fred in yesterday’s game against Wolves at Old Trafford, but unfortunately could not influence proceedings in a drab goalless affair.

A well-deserved #MUFC Player of the Month trophy for @Fred08Oficial! 🏆 pic.twitter.com/mVLfvSKmig