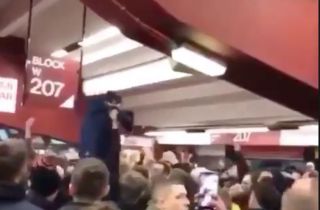 Bruno Fernandes made a bright start against Wolves but Manchester United still lacked a cutting edge as the game finished goalless.

The new signing showed flashes of his quality on his debut but nobody should expect him to solve Man Utd’s problems on his own. That belief, naively held by the club, has failed Paul Pogba.

“Bruno, Bruno, Bruno,” came the chant from the United fans in the stands. All eyes were on Bruno Fernandes.

On the Old Trafford concourse another new chant emerged for United’s new boy. We love the end of it as Fernandes is called ‘our Portuguese magnifico’.

You can watch it below via @ManUnitedZone_:

He’s only arrived and he has a song with his name in it.

Fernandes must be buzzing after making his first appearance at Old Trafford, but the result sadly casts a shower over that. He’s now aware of what he’s dealing with and the work required with the current crop of players.