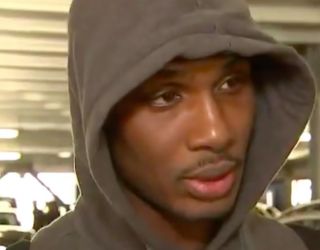 When Odion Ighalo left Watford for Shanghai Shenhua in 2017 he must have thought his dream of ever playing for Manchester United was over.

But three years later, the Nigerian striker has made the Old Trafford switch on a loan deal until the end of the season.

Such is the shortage of Ole Gunnar Solskjaer’s attacking options, the United manager felt it was necessary to bring in the 30-year-old as a short-term fix.

READ MORE: (Video) Tony Cascarino tells Solskjaer what he should do with Bruno Fernandes

While there is understandable scepticism about this deadline day signing as United finally landed a striker in their desperate search, it is clear that Ighalo loves the club.

Check out what he had to say about his Old Trafford arrival as he arrived in Manchester from China, courtesy of Football Daily: