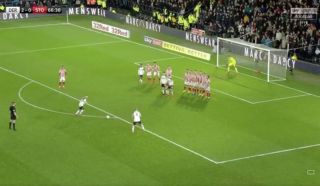 The 34-year-old beat England international Jack Butland with a perfect free-kick as the ball flew directly into the top corner.

Butland had no chance!

As things stand, Derby are 7 points adrift of sixth-placed Bristol City. There are plenty of games to be played and Rooney could inspire the Rams to push for a playoff spot this season.

England's all-time top scorer stands over the free-kick and bends a sublime effort into the top right corner, well beyond the reach of Butland. Absolutely magnificent.