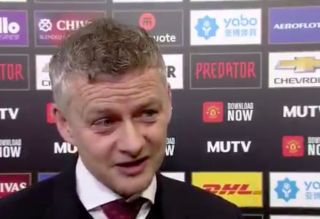 This wouldn’t have been a difficult decision for the United boss, who finally got his man this week after months of negotiations with Sporting Lisbon.

Nemanja Matic is suspended and Paul Pogba and Scott McTominay are both still sidelined so it’s no surprise to see Fernandes in the starting-line-up.

The Portugal international starts alongside Fred and Andreas Pereira in midfield, but we will have to wait to find out who plays in the advanced number 10 role.

Ighalo, 30, has joined on a six-month loan deal to bolster United’s threadbare attacking options until the end of the season.

Solskjaer believes he will add some much needed experience to the squad and discussed his credentials as a goalscoring threat.