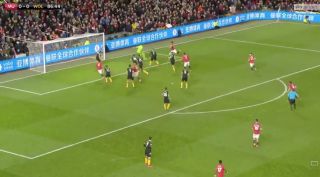 Ole Gunnar Solskjaer’s Reds were held to a 0-0 draw against Nuno Espirito’s side in a typically dull stalemate.

United and Wolves are both at their most threatening on the counter-attack and there were few chances for the Reds on the break against an organised opposition defence.

READ MORE: ‘At least Woodward did the walk out’: These Man Utd fans react to failed Glazer protest

Perhaps United’s greatest chance fell to the feet of captain Harry Maguire at the death.

The centre-half almost scored an improbable winner late on but was denied by Rui Patricio from a tight-angle.

United have once again missed the chance to close the gap on Chelsea in the top four and will remain in sixth behind Sheffield United.

Harry Maguire has an opportunity at the death but he can't connect!