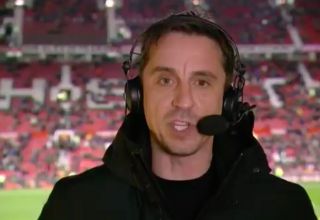 United signed two players in January; Bruno Fernandes finally made the move from Sporting Lisbon but the shock transfer was the deadline day arrival of Odion Ighalo.

While Ighalo is a much needed body to bolster Ole Gunnar Solskjaer’s threadbare attacking options, there is certainly a sense of desperation around his signing.

Ighalo, 30, has been playing in the Chinese Super League for three years and last played in the Premier League for Watford in 2017.

It was clear that United had to sign a forward in the January window after Marcus Rashford’s injury but this should have been prioritised as a necessity in the summer as well.

As Neville points out, United knew for months about Romelu Lukaku’s departure and this Ighalo deal proves the club’s board are reactive, rather than proactive in their transfer business.

Hear what United legend Neville had to say below, courtesy of Football Daily:

🗣"Ighalo, they just needed a body. I can't let the club off the hook. they've ended up desperately doing one on deadline day" pic.twitter.com/kjY4e1kXBH