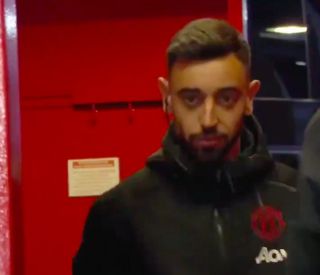 The wait is finally over for Manchester United fans to see Bruno Fernandes playing in a red shirt.

Fernandes starts in a midfield three alongside Fred and Andreas Pereira in this evening’s crucial Premier League game against Wolves at Old Trafford.

There were some doubts that Fernandes would have to settle for a cameo from the bench for his first United appearance, but Ole Gunnar Solskjaer is light on midfield options and does not have this luxury.

Fernandes started on Monday night for Sporting Lisbon and is clearly ready after taking part in full training for the Reds yesterday.

The Portugal midfielder will be hoping to make an immediate impact in attacking areas against today’s opposition, who he knows many of from his time on international duty.

Keep updated on Stretty News to find out how Fernandes gets on in his United debut.

Bruno Fernandes is in the building and he starts for Manchester United#MUNWOLV pic.twitter.com/HnVruUpQfj