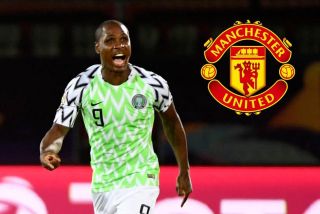 A photo of a young Odion Ighalo wearing a Manchester United shirt has emerged following the 30-year-old striker’s move to Old Trafford.

Man Utd moved late on deadline day to sign Ighalo from Shanghai Shenhua on loan until the end of the season.

The Nigerian previously played in the Premier League at Watford between 2014 and 2017, but it appears as though he always had a soft spot for United.

Thanks to BBC reporter John Bennett, we stumbled across a photo of Ighalo wearing United’s away shirt in 2005, as seen in the photo below:

A childhood dream could be about to come true… Check out which boyhood Manchester United fan is wearing a #MUFC top in this photo. #Ighalo pic.twitter.com/ibizwid9gC

This is a reminder that you should never give up on your dreams.

According to Sky Sports, Ighalo is due to fly to the UK from China, where he has played for the last three years, over the weekend.

Whilst in England he scored 16 goals in 55 Premier League appearances for Watford. Now he will provide short-term cover for Marcus Rashford.

We can’t wait to see Ighalo in action for United.