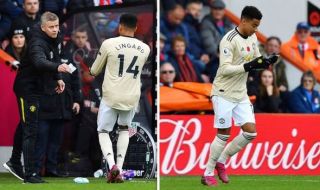 ‘If you lose the ball one more time, you’re off’ Ole Gunnar Solskjaer added an extra word into this that I won’t repeat but it was a loud and clear message. Just a few minutes later the recipient of said message, Jesse Lingard, did give the ball away and was quickly substituted for Andreas Pereira. Could this have been the final straw for the manager, whose patience has been severely tested by the 27-year-old?

Yes, despite the constant chatter in the media about Lingard’s ‘potential’ and his development to come, the fact is the Warrington born midfielder is actually entering what should be the prime years of his career. He does so having not directly contributed to a Premier League goal for almost 13 months. He has registered just two goals since December 2018, against Astana and Tranmere, hardly a glowing CV for a player who wants to be the main attacking midfielder at Old Trafford.

But this lack of form and overall contribution only tells part of the story. Lingard has been under the watch of the manager since an incident in pre-season that saw him publish, albeit accidentally, an extremely bad taste video taken from his holiday. Solskjaer was furious over the incident but accepted Lingard’s plea that it was accidental and his promise to knuckle down and sort himself out. Sadly that hasn’t happened.

Lingard has continued to maintain a heavy presence on social media (something the other player involved in the video incident, Marcus Rashford, has learnt to reduce) as well as founding a clothing line. Ordinarily, these things wouldn’t be an issue but Lingard’s lack of form and generally poor performances shine a spotlight on such things.

A further contributing factor has been Lingard’s decision to switch his agent to Mino Raiola (via The Telegraph), a man infamous for regularly moving his clients on and being paid handsomely for the privilege. In the early days of Jose Mourinho’s time in charge, United dealt regularly with Raiola bringing in Paul Pogba, Zlatan Ibrahimovic and Henrik Mkhitaryan whilst Romelu Lukaku was also a Raiola client when he joined the club. But in recent years United have pulled back from dealing with him over concerns about the way he operates. Lingard choosing to sign with him could be seen as a slight against the manager and the club.

But it’s not just the issues around Lingard that throw a cloud over his future. The signing of Bruno Fernandes, a player extremely comfortable in Lingard’s favoured ‘number 10’ position gives more competition for his place whilst Juan Mata has shown recently that he can still be effective and he remains a positive influence in the dressing room whilst, Andreas Pereira for all the criticism over his performances has shown more versatility than Lingard and has registered two goals and three assists since Lingard last registered one. The role of Paul Pogba if/when he comes back (and if he stays beyond May) also places doubts whilst the club continues to be linked with the likes of James Maddison and Jack Grealish, players who also play in a similar position to Lingard.

Take all these factors together and we could be seeing the final few months of Jesse Lingard’s Manchester United career, how often he plays in the remaining months should be watched with interest.