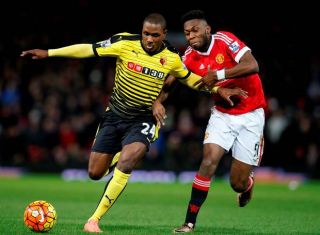 We are going to have to wait another while before Odion Ighalo gives his first interview as a Manchester United player, but last night I stumbled across something of interest.

BBC reporter John Bennett dipped into his archives of reporting that found the first interview he did with the former Watford striker in 2015.

The Hornets had been just promoted to the Premier League and Ighalo was preparing himself for the next step.

Being someone who grew up with a keen interest in English football, in particular Manchester United, Ighalo made it clear that he was excited about facing the Red Devils at Old Trafford.

First time I interviewed Odion in 2015, just after Watford’s promotion he told me “it will be a dream come true to play at Old Trafford against the team I supported in my youth.”

“When I was young in Nigeria I supported Man United, so it will be a dream come true for me to play at Old Trafford,” Ighalo told the BBC when he became a Premier League player. “To play against the team I have been supporting since my youth days, and I am very happy about that. I’m looking forward to the challenge and the experience.”

Fast forward almost five years and Ighalo has joined United on a six-month loan deal. There’s no way he thought this would happen this late into his career, which shows you should never give up on your dreams.

It makes the deal a bit more special knowing Ighalo is going to give his all to impress during his time at United.

Ole Gunnar Solskjaer wasn’t left with many options, but we think a wise one was made and Ighalo will score goals between now and the end of the season.