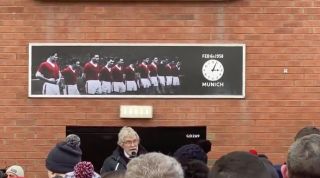 Manchester United paid its respects to all the victims of the Munich Air Disaster with commemorations at Old Trafford to mark the anniversary of the tragedy, in which eight players and three members of staff were among 23 who died.

Fans also paid their respects outside the ground, with their annual event consisting of readings and prayers, along with a rendition of songs under the Munich plaque at the south-east corner of the Old Trafford forecourt.

And this means there will be more activity in and around the ground prior to kick-off at 5.30pm (make sure to support the fanzines, United We Stand and Red News).

Footage has emerged online of today’s emotional tribute to the victims, thanks to Andrew Ruscoe (@andrew_ruscoe):

Beautiful tribute to the @ManUtd players who lost their lives in the awful Munich Disaster 🙏 #ManUtd pic.twitter.com/0F65xKFNFr

On February 6, 1958, a plane carrying the Manchester United squad — along with staff, journalists and other passengers — crashed as it attempted to take off from a snowy Munich airport.

The Busby Babes were travelling back from a European Cup clash against Red Star Belgrade, but the squad was then decimated as eight players suffered fatal injuries, with a total of 23 members of the aircraft passing away due to the injuries.