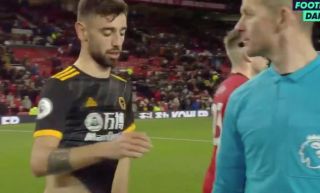 Manchester United have been held to a scoreless draw against Wolves at Old Trafford.

Bruno Fernandes made his debut and made sure to show the fans his willingness to shoot from distance. He was unable to open the Wolves defence, but the Red Devils didn’t tick at all in the final third.

Both teams were happy to patiently wait for a counter-attack opportunity which made it the type of game that should suit Fernandes.

A number of sides have come to Old Trafford this season with a low block, but players like Andreas Pereira and Jesse Lingard don’t possess the quality to break them down.

Hopefully with time he’ll settle and find a way to put the sword to teams in a United shirt.

Fernandes swapped shirts with Wolves new signing Daniel Podence. They were teammates at Sporting Lisbon previously and both came through the youth teams at international level.

See the video below (footage courtesy of Sky Sports):

Bruno Fernandes only been in Manchester a couple of days and looked the best player on the pitch…🇾🇪pic.twitter.com/W2llgtWYiW

Wolves had a number of Portuguese players playing today who would be familiar with Fernandes.