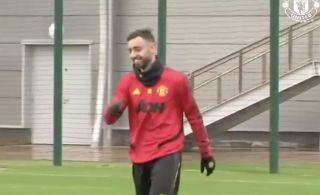 Bruno Fernandes trained with Manchester United for the first time this morning.

The Portugal international will now get to know most of his teammates — but may have to wait some time before being greeted by Marcus Rashford, Paul Pogba and Scott McTominay, with all three out for a sustained period with long-term injuries.

It comes as a relief for Man Utd fans to have the Fernandes deal done and dusted. Now we can finally look forward to seeing him in action for the Red Devils.

The official Man Utd Twitter account (@ManUtd) shared footage of Fernandes taking to the pitch earlier this month, after arriving at Carrington thanks to a lift from new teammate Diogo Dalot.

All eyes will be on Ole Gunnar Solskjaer’s starting eleven tomorrow as United face Wolves in the Premier League.

The game could mark Fernandes’ debut in a red shirt.

Stay tuned for transfer updates throughout the day with Stretty News.