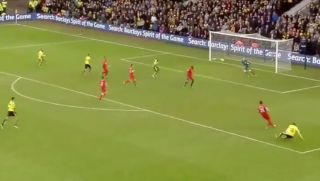 Throwback to December 2015. Odion Ighalo is in flying form for Watford as he scores a brace against Liverpool.

It’s now January 2020 and Man Utd are on the verge of signing Ighalo on loan from Shanghai Shenhua, as per Sky Sports.

No way would Ighalo have thought, at this stage of his career, he’d be joining the 20-times champions of England.

Well, it’s happening and everybody has an opinion on it. Rivals may laugh but hopefully we’re happy come May.

However, watching the clip below as Ighalo scores twice against the Scousers, you can tell he possesses a goalscoring instinct.

Nothing to see here, just Odion Ighalo scoring twice against Liverpool. Yes, this absolutely is propaganda and no I’m not trying to hide it pic.twitter.com/IP63jEw6AT

He may not be the player he was then, now aged 30, but United are short in the striking department and could do a lot worse than signing Ighalo this month.