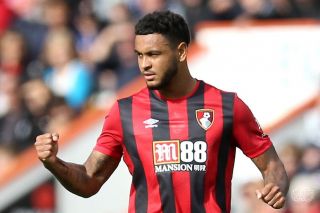 It is deadline day and Man Utd are clearly scrambling in the market for a new striker.

The latest from Sky Sports News may suggest United are closing in on a deal for the Bournemouth striker.

It is claimed, “One source has told Sky Sports News that a deal has been agreed to take Joshua King to Manchester United, so long as Bournemouth can find a replacement.

“However, Bournemouth insist that is not the case and nothing has been agreed yet.”

A source close to the transfer told Stretty News that Bournemouth offered King to United this week, which would suggest they are not against losing the 28-year-old this season.

Ole Gunnar Solskjaer is looking to make a short-term acquisition to bolster his attacking options for the rest of the season, though King would be a fine addition to have on the bench if the club signs a top goalscorer in the summer.

United fans may criticise the potential deal given Solskjaer’s views on long-termism, but the manager is left with no other choice because they’ve left it so late. Someone has to come in and score goals with Marcus Rashford ruled out for a sustained period with injury.

He knows King from managing him in the reserves, and David Ornstein of The Athletic has said the player wants to return to the club.

Josh King wants the proposed transfer from Bournemouth to Manchester United to happen and is ready to head north if an agreement can be reached between the clubs @TheAthleticUK #MUFC #AFCB https://t.co/zCMPShAokj

It doesn’t look like United have a better option available.