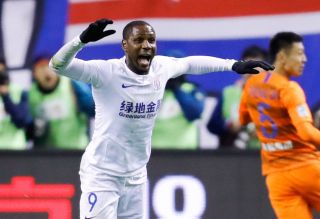 That’s according to reliable Italian journalist Fabrizio Romano, who claims “time is key” as United still have to agree terms with the Chinese Super League club.

It’s claimed to be a loan deal with a possible buy option, with United looking for cover in the transfer market after Marcus Rashford sustained a long-term injury earlier this month.

United had a bid rejected for Bournemouth striker Joshua King today, even though the former Man Utd youngster was keen on a return to Old Trafford, as reported by The Express.

Now it looks like they’ve come to the conclusion that a loan deal involving Ighalo would suit best.

As you can see below in Romano’s tweet, United are working to get the deal done before tonight’s deadline.

Man United have reached an agreement with Odion Ighalo on personal terms and salary. Now Man Utd are in contact with Shanghai Shenhua to find an agreement – possible loan + buy option. But just 2.30 hours left before the window will be closed… time is key ⌛️⏳ #MUFC #ManUnited

The Red Devils have already signed Portugal international Bruno Fernandes this month and look like they could add another player to the squad tonight.

They need to negotiate shrewdly now to get the deal over the line.