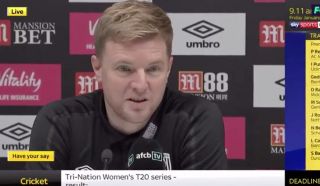 Eddie Howe spoke the press this morning and was immediately asked about the future of Josh King.

According to Sky Sports, Manchester United had an offer rejected for the Norwegian striker and are considering a second offer.

Man Utd have until 11pm to sign a striker before the transfer deadline, so time is running out to find a goalscoring replacement for Marcus Rashford, who has been ruled out with a long-term injury.

Anthony Martial is not consistent enough and it’s too soon to be relying on Mason Greenwood.

Howe is reluctant to sell one of his best players but judging by his answer and reaction to the question on King’s future, amid interest from Old Trafford, it sounds like a decision could be out of his hands.

Bournemouth may decide to cash in on King if United meet their valuation of the player.

🗣”He is a massive part of our team and with a day to go it is difficult to find a replacement” pic.twitter.com/UpY7rCN9rf

Solskjaer knows King and the striker has always spoke highly of his former club and reserve team manager.

Don’t go anywhere today as we’ll have updates on this story and more prior to the 11pm deadline.

A second offer would suggest United have made their mind up and want to prioritise King over other reported targets.