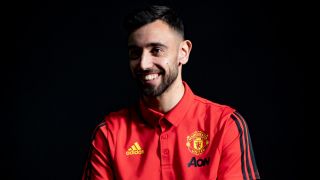 Bruno Fernandes will wear the no.18 shirt at Manchester United.

The 25-year-old was officially unveiled as a Man Utd player on Thursday, signing from Sporting Lisbon, where he was the club captain and main source for goals.

Fernandes wore the no.8 shirt at Sporting but he’ll wear the iconic no.18 at Old Trafford, previously worn by club legend Paul Scholes. It was most recently held by Ashley Young, who departed for Inter Milan earlier this month.

There is a chance we could see our new signing in red for the first time on Saturday, when United take on Wolves in the Premier League. The squad will then have a break from games which means Fernandes will then have the opportunity to get to know his teammates better.

The no.18 shirt has been worn by four United players since squad numbers were first introduced, ahead of the 1993/94 Premier League season. Darren Ferguson wore the shirt five times in that campaign before joining Wolves in 1994.

Simon Davies then took it for two seasons and interestingly made 18 appearances.

In 1996, Scholes switched from 22 to 18 and held onto that number for the next 15 years — prior to his retirement in 2011. He returned to the Reds six months later and reverted back to the vacant 22, with Young taking the no.18 shirt while the ginger prince was temporarily retired.

Hopefully Fernandes does the shirt justice!