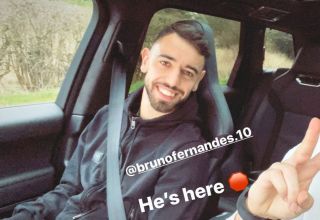 Bruno Fernandes arrived in Manchester yesterday and the new Manchester United signing is getting settled in ahead of his first training session.

The Portugal international took a lift to training with Diogo Dalot this morning, with the latter appearing delighted to have a new Portuguese player added to the squad.

Dalot joined United from FC Porto in 2018 as a potential right-back for the future. He may not be a starter now — and spent much of this season in the treatment room — but he’s back in action again and should be aiming to push Aaron Wan-Bissaka for a place in the team, even if that seems unlikely right now.

The young full-back has been used further up the pitch in games this season, so maybe Ole Gunnar Solskjaer thinks he could be used as a winger in the future.

Dalot shared a picture via Instagram stories with Fernandes sat in the passenger seat, en route to Carrington training ground.

It can be difficult moving to a new country but hopefully the United dressing room helps to make Fernandes feel at home.

As a midfielder, he sounds like an all-rounder with a keen eye for goal.

An exciting prospect for United fans!