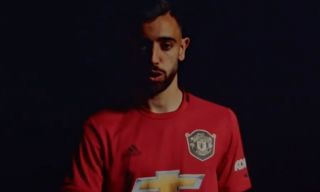 At long last the saga is over. Bruno Fernandes is a Manchester United player following his move from Sporting Lisbon.

We’re delighted with the announcement because Man Utd have needed a player like this since the summer. It’s took a few months for Ole Gunnar Solskjaer and the board to realise that, even though Fernandes was available then too.

The best player in the league during his time at Sporting, we need to give the Portugal international time to settle in England, and hopefully over the coming months he will be scoring goals and registering assists.

United have released a video unveiling Fernandes in his new kit (via Instagram).

Fingers crossed he is available to play on Saturday against Wolves.

There’s a lot of excitement surrounding him and the influence he could have on United.