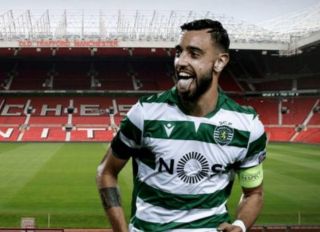 A Sporting Lisbon supporter and jumped online to describe what Manchester United are getting with the imminent arrival of Bruno Fernandes.

Fernandes has spent three years playing for Sporting where he became recognised as the best player in Portugal — winning Primeira Liga Player of the Year in 2018 and 2019.

Midfield has been a problematic area for United this term and it is thought that Fernandes will help Solskjaer’s side break down teams that they tend to struggle against.

The Portugal international will chip in with goals and assists if his form with Sporting is anything to go by — having contributed eight in 17 Primeira Liga appearances. United’s best Premier League goals return from midfield comes from Scott McTominay (three in 17 appearances), who is currently out with a long-term injury, while Andreas Pereira has just one in 21 league matches.

Fernandes has also racked up seven assists this season which bodes well for his new teammates.

63 – Bruno Fernandes has created 63 goalscoring chances in the Primeira Liga this season, 18 more than any other player in the competition. Goodbye. pic.twitter.com/U6V28Dq0M0

Sporting fans are saying goodbye to their best player and will hope the club has something positive planned in the near future.

One fan gave his opinion online, stating that Fernandes is ‘way more than just a great player’.

Fernandes is praised for his fitness and willingness to carry out multiple roles in the team.

Opinions of a Sporting fan on Bruno Fernandes ♥️🖤 pic.twitter.com/EaB7bpdfPJ

The message reads as follows:

“You have no idea the deal you’re getting… He’s way more than just a great player, he attacks and defends constantly throughout the whole game, he does sprints at the end of the game to prevent a counter attack even though we’re winning by more than 1 goal, he’s the first guy to show his face when things are bad, the first to push his teammates to give 200% on the pitch, he attends the youngsters games regularly, welcomes new signings to the team and helps them in whatever way they need in their daily lives until they’re settled, he lives and breathes the club he’s in. A leader in every sense of the word.”