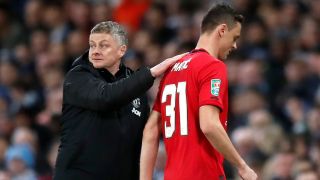 Ole Gunnar Solskjaer said that Nemanja Matic was his man of the match in last night’s Carabao Cup clash against Man City.

Manchester United beat Pep Guardiola’s side 1-0 in the second leg of their League Cup tie but lost 2-3 on aggregate. Matic scored the only goal of the game but had a forgettable ending to the match as he was sent off for a second yellow card offence.

The manager addressed the media after the match and singled out some of his players for praise. He claims Matic was his MOTM, saying: “David [De Gea] shows, again, when he’s the best keeper in the world. I think the back four, with Harry [Maguire] and Victor [Lindelof], were excellent. Young Brandon [Williams] has been unbelievable again. And Nemanja was the man of the match for me.” (Quotes from ManUtd.com)

Matic provided great support for United’s defence but Solskjaer was right to single out other players for praise, too. De Gea kept United in the game with three brilliant saves inside the first 15 minutes, and we just can’t get enough of Williams at the moment.

It’s a good time for Matic to be hitting top form with injuries to Scott McTominay and Paul Pogba causing problems in midfield, but Solskjaer will soon have Bruno Fernandes added to his squad for future selections.

The manager will be eager to get everyone back fit so he can start fielding his strongest possible team each week.

Does that include Matic, though? We were all talking up McTominay earlier this season after he took the Serb’s place in the team.

United take on Wolves at Old Trafford on Saturday and we could see Fernandes make his debut.