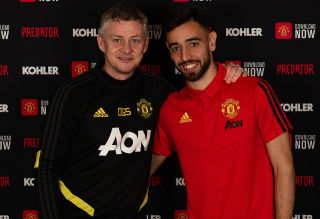 Manchester United have confirmed the signing of Portugal international Bruno Fernandes on a five-and-a-half year deal from Sporting Lisbon.

The announcement brings the tiresome transfer saga to an end and the midfielder could be involved in Man Utd’s next game against Wolves on Saturday.

In a statement published on the club’s official website, Fernandes revealed his excitement at joining the 20-times champions of England.

“My love of Manchester United really started when I used to watch Cristiano Ronaldo play and ever since then I have been a big fan of this club,” our new signing said.

“For me to now play for Manchester United feels incredible, I have worked hard to get to this moment and I can promise the fans that I will give everything for the badge to help bring us more success and trophies.

🔴 🤝 🇵🇹#MUFC is delighted to announce the signing of Bruno Fernandes!

“I want to thank Sporting for everything they have done for me. It is surreal to hear the nice words that have been said about me from players that used to play for this team. A massive thank you to Ole and everyone at Manchester United for the trust they have shown in me and I can’t wait to start to repay that on the pitch.”

Solskjaer was thrilled with the announcement, saying, “We have been tracking Bruno for many months and everyone here has been tremendously impressed with all his attributes and what he will bring to this team.

“Most importantly he is a terrific human being with a great personality and his leadership qualities are clear for all to see.

“Bruno’s goals and assists stats speak for themselves, he will be a fantastic addition to our team and he will help us push on in the second part of the season. The winter break is coming at a perfect time for us to integrate Bruno into the squad and for him to get to know his team-mates.”

United are reportedly paying an initial sum of €55m for the playmaker with add-ons, as reported by GOAL.

The 25-year-old leaves Sporting after two-and-a-half seasons, during which he made 137 appearances, scoring 63 goals and registering 52 assists.

Solskjaer now has a top player to play in behind the striker. Jesse Lingard has been woeful this season and Juan Mata hasn’t got the legs to play every week.

This weekend the manager has an opportunity to show off his new toy.

And with Wolves being defensively organised, we may need some inspiration from Fernandes to break them down.