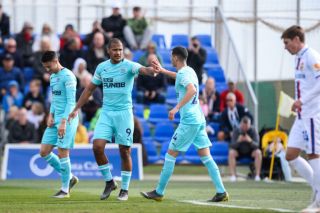 Solomón Rondón is a transfer target for Manchester United after the club missed out on AC Milan striker Krzvstof Piatek, according to The Times.

Piatek is expected to join Hertha Berlin for £23m — so you have to wonder how Man Utd managed to miss out on that one. The report claims the Red Devils were close to a deal to sign him on an 18-month loan.

Rondón, the former West Brom striker, could be available on loan after the Chinese Super League cancelled the start date of the new season due to the coronavirus epidemic. They have yet to announce a new start date which could see players leave between now and the transfer deadline on Friday 11pm.

The 30-year-old striker currently plays for Dalian Yifang, managed by Rafa Benitez whom he played under during a loan spell at Newcastle United in 2018-19 when he scored 11 Premier League goals.

Solskjaer needs a new striker this month after losing Marcus Rashford to a long-term injury.

Unfortunately, Anthony Martial is not reliable enough to produce the goods on a consistent basis for the rest of the season.

I don’t know if Rondón is the answer, or if the apparent interest is true, but United need to move quickly.

Can’t say this rumour fills me with excitement though.