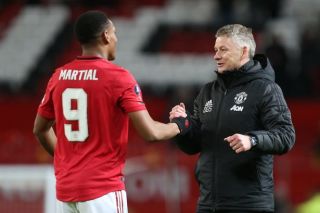 It sounds like Manchester United are not stopping business with Bruno Fernandes.

They’ve kept it until the end of the transfer market as Ole Gunnar Solskjaer attempts to sign a striker before Friday’s 11pm deadline.

The long-term injury suffered by Marcus Rashford doesn’t help. Solskjaer needed another goalscorer to chip in with goals to help the England international. Now he’s out for a sustained period, and United are going to struggle for goals more than ever this season unless they make a move in the transfer market.

Mason Greenwood is too young to be relying on — but you wouldn’t be surprised if Solskjaer was forced to judging on how the club is being mismanaged by the board and the Glazer family.

The only real option right now is Anthony Martial and he is far too inconsistency to be United’s main frontman.

#MUFC transfer business might not be over with Bruno Fernandes. They are looking to add one more signing by tomorrow, possibly a striker.

And it comes as no surprise that it could be a striker after Solskjaer’s comments last night.

The claim has also been backed up by The Athletic.

“The club are at the stage where any incoming would be a risk but with Marcus Rashford probably to be out injured until April, it feels like one worth taking.”

Does any striker come to mind?