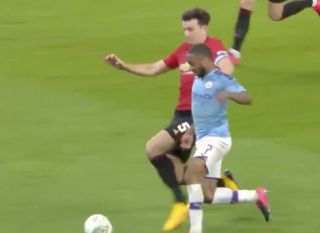 Harry Maguire was a rock at the back last night as Manchester United came away from the Etihad with a 1-0 win, thanks to a goal from Nemanja Matic.

The dressing room was probably flat at full-time given the result on the night wasn’t enough to book United a place in the Carabao Cup final. Man City won the tie 3-2 over two legs.

While Pep Guardiola’s side had chances to score last night, they couldn’t get past David de Gea or the United defence.

READ MORE: Solskjaer announces his man of the match after 1-0 win over Man City

Sterling had a great opportunity to score after being played in by Kevin De Bruyne. With his pace, Reds in the away end feared the worst, but Maguire was able to use his pace and strength to get the better of his England teammate.

BIG tackle from the skipper 😤

Maguire isn’t the quickest usually, but he did really well to get back and stop Sterling.

Sterling rarely performs against United and last night was another game to forget for the winger.

It’s a shame that we won’t be in the final given the effort the lads put in last night.