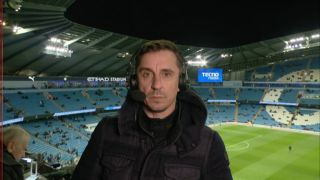 Gary Neville has condemned the attack on executive vice-chairman Ed Woodward’s house this week but reiterated things must change at Manchester United.

As noted by The Sun, the attack took place at Woodward’s home in Cheshire and it sparked outrage on social media yesterday.

However, it is suggested that none of his family were home at the time.

It comes amid ongoing discontent among Man Utd fans over the running of the club. Woodward isn’t even the biggest problem; that lies with the Glazer family, but he’s their puppet and should also be held responsible for the club’s decay.

Neville insists that no-one deserves to be intimidated at their home and fans must find other ways to express their feelings.

That said, he also added that things must change at Old Trafford as he believes that the situation has been getting worse for some time specifically in terms of how the club is run and the infrastructure at board level.

“Manchester United fans are extremely frustrated,” Neville told Sky Sports before the derby took place at the Etihad. “It’s been coming now for some time — not just with Ed Woodward but with the ownership as well. And it’s not going to get any better because essentially the football club is being mismanaged and the fans are not daft.

“However, there’s no reason for that to stretch to going to houses. It should be kept to other means and the fact of the matter is no one deserves that. Ultimately, Ed Woodward has done a great job for the club in certain areas – in terms of what he brought in to do for the Glazer family.

“So the fans have taken that frustration out in a way that has gone too far but it’s a fine line in terms of passion and frustration. They feel like their voice is not being heard – it can never be condoned because no man and their family deserve to have that and the reality is it’s wrong. I have to say that.

“But, the fans have gone – their heads have gone. It’s going to get noisier and noisier. Something needs to happen at the football club. They still don’t have a technical director, a football director, they still don’t seem very slick in the transfer market. Those are the main focal points for the fans and it needs to be dealt with quickly because Manchester United is a great club who at this moment in time are struggling.”

“People’s families should not be attacked through football.”@GNev2 reacts after Ed Woodward’s house was attacked last night.

While there has been a boost for United in the Bruno Fernandes saga, that’s not the sort of change Neville is talking about…

The club is in dire need of a restructuring process. Without the Glazer family and without Woodward.