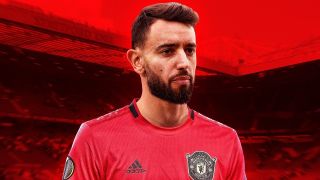 Manchester United are closing in on their first signing of the January transfer window as Bruno Fernandes was pictured this morning en route to Carrington training ground.

Manchester Evening News can confirm that Fernandes arrived at United’s training facility on Thursday morning ahead of his medical.

The Red Devils are expected to complete the signing of the Portugal international having reached an agreement with Sporting Lisbon on Wednesday.

The proposed transfer became a saga this summer as United and Sporting haggled over transfer valuations.

United made an official announcement on Wednesday evening, saying an agreement had been reached a deal was subject to a medical and agreeing personal terms.

Sporting will receive €55m up front and €10m in add-ons. They could bank another €15m in add-ons based on individual milestone achieved by the player during his time at Old Trafford.

Check out the photo below as Fernandes left the Lowry Hotel for Carrington training ground.

Bruno Fernandes is on his way to Carrington for his medical. #MUFC [MEN] pic.twitter.com/shSKiKf4iW