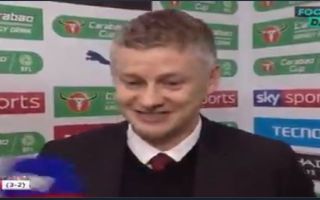 It’s been the worst kept secret in football this month that Man United were doing all they could to sign Bruno Fernandes, and it looks like we might have a breakthrough.

The United website stated that an agreement had been reached with Sporting for his transfer, but it was just a matter of agreeing personal terms and getting the medical done.

It was inevitable that the manager would be asked about his arrival after the game today, but he tries hard to not give anything away:

“Bruno Fernandes? He will bring us a lot, hopefully we can get it over the line then we can talk.”pic.twitter.com/SeWb9aQpHF

Even by trying to say nothing you can still tell there’s a bit of excitement about his possible arrival. It will finally give Ole a creative midfielder who’s capable of grabbing a goal, which could be vital now that Marcus Rashford is out injured.

Hopefully the deal is done quickly and we might get to see him take part against Wolves at the weekend.