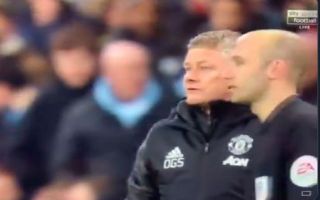 Ole Gunnar Solskjaer does get some stick for being almost too nice and laid back, so this makes a big change.

They often say that you never want to see a kind or patient person get angry, and that’s evidenced here as Ole loses it with Jesse Lingard and it looks pretty terrifying:

Ole to Lingard before replacing him with Andreas shortly after: “Jesse, one more time and you’re f*cking off!” #mufc [@treble99united]

Ole’s dark side finally shows itself shouting at Lingard! Soooo much time for this! pic.twitter.com/DJnNhg6Lne

Lingard has had one of his worst seasons yet, but he did come up with a vital contribution as his skill led to the free kick that resulted in the opening goal

We’ve seen it so many times over the years that an out of form player suddenly gets a lucky break and everything clicks again, but this from the manager probably won’t help.