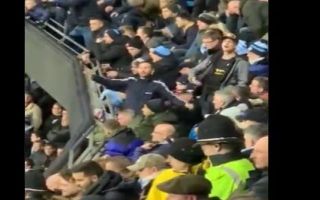 We’ve seen plenty of press coverage aimed at vilifying the Man United supporters in recent weeks, but let’s not assume they were the only ones at fault.

There’s nothing worse than seeing an imbecile try and get attention by mocking he tragic deaths of anyone, but this Man City “fan” made an utter disgrace of himself by making airplane gestures towards the United fans tonight:

Retweet so we can find out who this disrespectful man is so he gets what he deserves. #mufc @ManUtd @ManCity pic.twitter.com/894MgJRJ3Z

Usually you see this type of behaviour when someone knows they have a crowd around them that will back them up. This fool has one person trying to join in, but you can see the rest of the support is embarrassed and wants nothing to do with him.

The timing is particularly crass when you consider the anniversary of the Munich Air Disaster is coming up, so let’s hope City identify him and make sure he’s dealt with appropriately