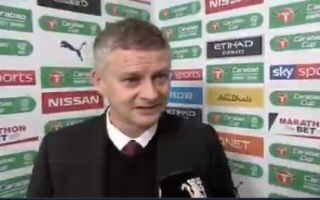 It seems fair to say that a positive result was needed in the first leg if United had any chance of advancing to the final of The Carabao Cup.

But there’s still plenty of hope left in this one, United won at The Etihad earlier in the season and City haven’t been in glorious form lately, so you never know.

The manager was explaining his selection and approach to the game tonight, but it’s strange to hear he will be taking a different approach:

Sound 🔛 to hear from Ole on his team selection, our approach to the game and today’s transfer news 🔊#MUFC #CarabaoCup pic.twitter.com/aw239kWe1r

The loss of Rashford will be huge, but there’s still plenty of pace in this team and City’s defence is an obvious weakness.

Solskjaer talks about needing a different type of performance and not needing to blitz them like last time and having chances to go a few goals up, but that would actually be ideal.

It sounds like he wants to keep it tight and be within a goal going into the last 20 minutes. That means the defence will need to stay strong, but hopefully United can strike early and take it from there.