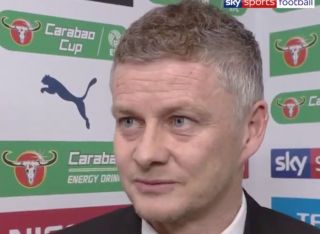 Ole Gunnar Solskjaer spoke to Sky Sports ahead of tonight’s Carabao Cup semi-final against Man City at the Etihad.

The Red Devils go into the second leg with a two-goal deficit after losing the first leg 3-1 at Old Trafford. They face a massive task tonight to turn the tie on its head and book a place in the League Cup final.

Sky Sports were keen to ask Solskjaer about United agreeing on a deal with Sporting Lisbon to sign Bruno Fernandes. He looked happy at the news and we could see the Portugal international in action at the weekend against Wolves.

Solskjaer also commented on the incident that occurred outside Ed Woodward’s Cheshire home last night, when 20-30 United fans showed up in protest. Some threw flares over the gate into Woodward’s garden.

The manager says everyone at the club is ‘disgusted’ with what happened.

Check out the video below, courtesy of Sky Sports:

"Everyone at the club and our proper supporters are disgusted with what happened."