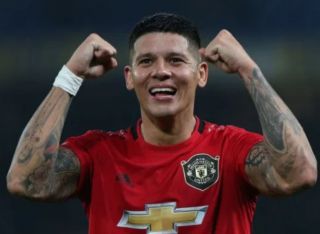 Manchester United has agreed to a loan move Marcos Rojo to Estudiantes until the end of the season, according to The Sun.

The seldom-used Rojo has a big supporter of Estudiantes manager and former United player Juan Sebastian Veron. An opportunity to link up with Argentinian legend Veron, 44, will no doubt be a bonus for Rojo.

Veron, who didn’t have a spectacular career at United, feels that he can revive Rojo’s career at Estudiantes and pick up a spot on the national team ahead of the Copa America in the summer.

Rojo joined United in 2014 from Sporting Lisbon and at one time was linked to return back to the Portuguese club in exchange for Bruno Fernandes, as per The Metro, but was reluctant to go because of a lack of playing time on the first team.

Only making nine appearances this campaign, Rojo was given time off over Christmas to spend time at home with his family and reevaluate his future. With the return of Eric Bailly from injury, his opportunity for United was almost non-existent at this point.

Rojo proved a disappointment and troubles in his personal life earlier in his time at Old Trafford left club officials frustrated.

It was reflective of United’s poor recruitment that the club were unaware at the time of signing Rojo that he was being investigated by police for an alleged bottle attack on a neighbour in Argentina and facing the possibility of a criminal trial. Rojo ended up settling out of court and the case was dropped, as per the Telegraph.

Terms of the deal have not been disclosed and Rojo is expected to be in Argentina this weekend.