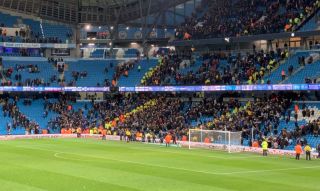 Simon Peach claims Manchester United fans have thrown some chairs and other missiles from the away end.

It appears as though the incident occurred near the end of tonight’s match, with Man Utd winning 1-0 but still losing out on a place in the final after suffering a 3-1 defeat in the first leg.

We have yet to see any photographic or video evidence of United fans misbehaving in the away end, but Peach has no reason to lie, and is a respected journalist when it comes to news surrounding the club.

See his tweet below as United fans were kept in the away end at full-time, which is usually the case for travelling fans at football matches.

Some chairs & other missiles appear to have been thrown from the away end toward home fans pic.twitter.com/Voy4fQroy2