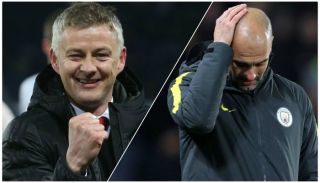 It’s a tough one tonight and in many ways it sums up the season so far. There were encouraging signs within the team that suggest they could go on a great run of form, while there are some interesting achievements to look at too.

In the end it doesn’t truly matter because City advance to face Aston Villa in the final, but it’s only natural to try and find some positives.

READ MORE: Video: “Jesse one more time and you’re f**king off” – Solskjaer loses it with Jesse Lingard vs Man City

There were some good individual performances and a clean sheet at The Etihad is always a good achievement, while Solskjaer became the first manager to beat Pep Guardiola twice at The Etihad:

Solskjaer is the only manager to beat Pep Guardiola’s Manchester City twice at the Etihad Stadium. #MUFC pic.twitter.com/LmwNcB9ohU

All of that ties in perfectly with the ” two steps forward, one step back” nature of United’s season so far, so they need to kick on from here and ensure there’s no mid week hangover for the Wolves game on Saturday.

Pep Guardiola’s team might be having a down year compared to previous standards, but this is still a feather in Ole’s cap, even if you don’t see him as a long term option it should be admired.

Despite all of this, it will mean nothing if United don’t win their next game.