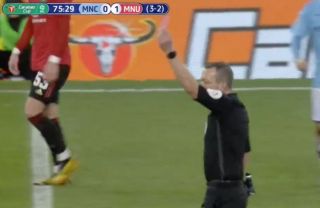 Nemanja Matic has been sent off at the Etihad.

The Serb had been warned during the game by the referee after receiving an early yellow card.

Some might say Ole Gunnar Solskjaer is responsible for not taking Matic off, but it was a risk worth taking given United don’t have a defensive minded midfielder on the bench.

We missed him in the first-leg and he scored a stunning first-half volley to put United ahead.

There can be no complaints about the second yellow either.

It may look soft but it was a move Matic didn’t need to make as the ball was still in City’s half.