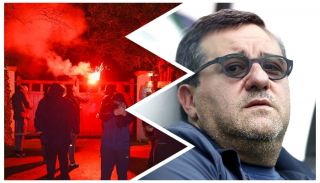 Paul Pogba’s agent Mino Raiola has strongly condemned the attack on Ed Woodward’s house and called for the perpetrators to be put in prison.

In an exclusive interview with The Athletic, Raiola accepted he has not always seen eye-to-eye with Woodward on business matters but insisted “football is not that important in life”.

The police are said to be investigating the matter, as 20-30 balaclava wearing Manchester United fans showed up outside his Cheshire home and flares were thrown over the front gate.

Raiola said: “If anyone has used me as a reason to create any anger towards Ed, they are totally in the wrong because my relationship with Ed is good, it is professional, and we don’t always need to agree but that’s normal. What happened last night is not normal. It is violence and I condemn any type of violence. These guys are morons and this is criminal bahaviour.

“These people need to be locked up and re-educated. This cannot be part of sport. This is sport — S P O R T. This is not a question of life and death, it is EN-TER-TAIN-MENT.

“Do you think people attack the house of Brad Pitt if he makes a bad movie? Or does Quentin Tarantino get death threats because his film was not good? There is no reason or excuse, none whatsoever for this and Ed Woodward has my full support and solidarity.”

United said anybody found guilty of involvement in the attack would be banned for life, as reported by Samuel Luckhurst of the MEN.

‘Anybody found guilty of a criminal offence or found to be trespassing on this property, will be banned for life by the club and may face prosecution. Fans expressing opinion is one thing, criminal damage & intent to endanger life is another. There is simply no excuse for this.’

The attack came amid growing unrest at Woodward and the Glazers. There has been protests against the Glazer family twice before, first when the American family plunged the club into hundreds of millions of pounds of debt in 2005, and again in 2010 when the Green and Gold campaign caught wind.

Raiola has not always been complimentary about the running of United, saying art the start of January that the club is ‘out of touch with reality, without a sporting project’ (via The Telegraph) so even if the Italian super agent condemns the attack, surely he can see why United fans are angry with Woodward and the Glazers?

“I totally disapprove,” Raiola added. “I am with Ed Woodward — I’m on his side in this.

“In the dark ages, the biggest problem with English football was violence in the stadiums. When they resolved that, the Premier League started growing and is today what it is.

“I disapprove of violence against players, trainers, supporters, anyone and especially this kind of violence and harassment. This is not how things should be done, this is not correct, this is not party of the game and we should condemn any form of violence anywhere and that’s what I’m, doing — I’m totally on his side.

“In a country like England where people are so known for their class, for their upbringing, for their education… for a Premier League that grew because of its eviction of violence. This cannot be happening to a man — going to his private house and menacing him and his family. Are we totally crazy? Football is not that important in life.

“I am behind Ed 100 per cent and I think everybody in football should stand in support, whether you agree with him or not. It’s not important if you agree with him or not like in business — this is not business, it’s violence and everybody should stand with him. Nobody has the right to attack your house and menace your family. What would have happened if his children were home? Are we totally crazy? Is this England?!

“It is a total lack of respect and I don’t care who or what is to blame for this. We have to condemn it. Everyone has their own responsibility. Don’t hide behind social media or say someone told you to do something.

“There is no place for violence inside or outside the stadium, and especially when it involves your house and your family. This is inadmissible.”