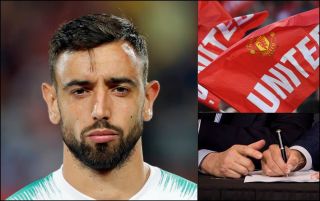 Manchester United have announced it has reached agreement with Sporting Lisbon for the transfer of Bruno Fernandes.

The deal is subject to a medical and the agreement of personal terms.

Usually the latter is sewn up before the two clubs reach an agreement over transfer costs, so once the medical is complete we should see pictures of Fernandes holding a Man Utd shirt.

According to a statement from the club, a further announcement will be made in due course.

United fans will be delighted they have finally got their man who they have been chasing hard all month.

Sporting have taken to Twitter to post a video tribute to the 25-year-old who departs after three years at the club.

“Some are born great, some achieve greatness, and some have greatness thrust upon them".

Fernandes has become the fourth Sporting player to join United, following in the footsteps of Nani, Marcos Rojo and club legend Cristiano Ronaldo.

United take on rivals Man City in the second leg of their Carabao Cup semi-final later this evening.

We hope to see Fernandes involved against Wolves at the weekend.