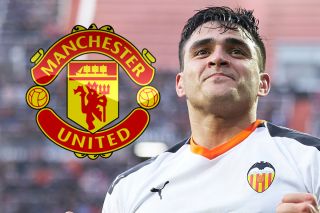 It won’t do us much good for the rest of the season, but it sounds like Manchester United are looking to improve their strike force in the summer.

The long-term injury to Marcus Rashford has come as a major blow this season, with Anthony Martial, Mason Greenwood and Daniel James all looking good as a supporting cast, but none of them are ready to lead the line for Man Utd at this point in their careers.

Rashford had been doing a good job at that until he suffered a double stress fracture to his back.

However, as reported by BBC Sport and Cadenaser, Valencia striker Maxi Gomez is leading United’s wish list for next season.

Spanish radio channel Cadena SER reporting that Valencia striker Maxi Gómez is on Ole Gunnar Solskjær’s short list, and is wanted as part of the “2020/2021-project”. United said to have scouted the 23-year old on several occasions this seasons pic.twitter.com/vY8gBz7PHM

The Uruguayan, 23, has an impressive scoring record since moving to Europe, but the report suggests that he has a release clause of €140m so that could be a tricky obstacle.

According to The Sun, United scouts watched Gomez score twice against Barcelona at the weekend.

It’s not clear if Valencia would accept a lesser offer, but we can’t see United paying that much to sign him.

Gomez is a physical striker who would bring a completely new dimension to the United attack if they do land him in the summer.

With Rashford out for a sustained period, it looks like Ole Gunnar Solskjaer will trust Martial to lead the line but an injury to the French forward could be disastrous.

You can’t win games if you don’t score goals. That’s the biggest warning you could give this United side between now and the end of the season.