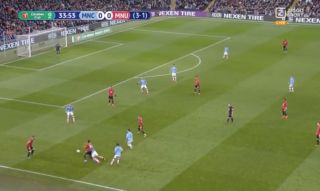 Manchester United are currently 1-0 up against Man City but need another two goals in normal time to qualify for the Carabao Cup final, as well as a clean sheet.

The home side dominated the first-half but Man Utd defended well and we hope they can keep up that much for the remainder of the match.

Nemanja Matic scored a stunning volley to give United the lead 10 minutes before the break.

The goal came from a free-kick after Jesse Lingard was fouled. He nutmegged two City players in the process, as seen in the video below (courtesy of Ziggo Sport):

Raheem Sterling just missed an open goal after rounding De Gea. While there were United defenders in front of him, all the City winger needed to do was hit the target.

Instead he sent his effort over the bar.

United could do with another goal in the coming minutes…