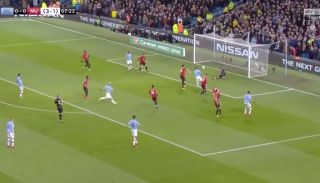 Man City are enjoying most of the possession at the Etihad.

They’ve already had two huge opportunities on goal but the scoreline remains 0-0.

However, City have a two goal advantage after winning the opening leg of this semi-final tie 3-1 at Old Trafford.

The first real chance came from a Sergio Aguero header, which saw David de Gea stretch across his goal brilliantly to deny.

Then Riyad Mahrez had a chance on goal moments later. This time De Gea used his feet to stop the City attacker’s effort on goal.

Both chances can be seen below, footage courtesy of Sky Sports:

🎙️ "City have started so well!"

De Gea denies firstly Aguero and then Mahrez to keep #MCFC at bay!

With City piling the pressure on, United need to wake up quickly. It doesn’t look like our players know what to do — whether to push forward to wait to hit Pep Guardiola’s sit on the counter-attack.

Something needs to change, unless we can get a goal against the run of play!