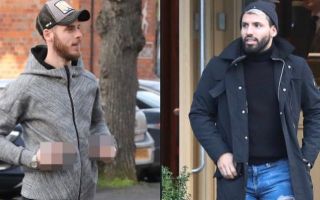 David de Gea and Sergio Aguero are mates since their time together at Atletico Madrid, and it appears as though the pair enjoyed a bit of banter off the pitch in Manchester this week.

According to The Sun, the Premier League pair crossed paths at a restaurant in Hale Village, Cheshire, and De Gea greeted the Man City striker by sticking up his middle fingers at the Argentine.

It is reported pair had a short catch up before going their separated ways ahead of Wednesday night’s Carabao Cup semi-final between the two teams. Man City hold an advantage after winning the first leg 3-1 at Old Trafford, so Manchester United have it all to do…

Check out the photo below via @ManUtdInPidgin:

David de Gea dey tell Sergio Aguero f**k you. My keeper dey petty, i like am like that 😂🤣#mufc pic.twitter.com/dRvr2NazQg

We don’t know yet who will advance to the final, but it’s certainly looking like it will be City unless the Man Utd players perform out of their skin at the Etihad.

De Gea will be hoping United can turn it around!