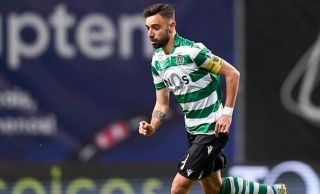 There are ‘major developments’ this evening in the ongoing Bruno Fernandes saga.

Manchester United are said to have increased their offer to Sporting Lisbon twice in the last 24 hours. The second offer, according to Sky Sports, is worth €55m plus add-ons.

One of those add-ons reportedly includes Sporting receiving an additional €10m, if Fernandes players a certain amount of games for United. Sky Sports are claiming that this target is achievable.

It is noted in the report that Barcelona have entered the race to sign Fernandes which could complicate things for United. The La Liga champions are now reportedly confident of signing the 25-year-old — and want to send him out on loan to immediately to Valencia, as per the Daily Mail.

But the update from Sky Sports hints that Sporting and United could now finally be in agreement over the transfer of Fernandes.

Bruno Fernandes is now expected in England tomorrow to complete the move to Man Utd.

The bonus structure will be:

Reliable Italian journalist Fabrizio Romano has weighed in on the story, adding that the agents involved are ‘confident’ a transfer seeing Fernandes join United will be done.

Bruno Fernandes is waiting and buzzing in Lisbon… and he’d be ready to fly to Manchester tomorrow with his agents if the total agreement will be completed on next hours. Talks on. 🔛🔴 #MUFC #ManUnited #BrunoFernandes #transfers

Time is running out to get the deal over the line with the deadline on Friday at 11pm, and United have yet to complete any transfers this month, despite Ole Gunnar Solskjaer’s squad being in desperate need of reinforcements.