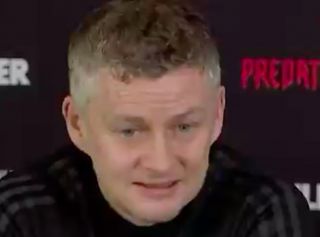 ESPN’s Rob Dawson reported on Monday Evening that Sanchez would be given a chance to resurrect his United career after a disastrous 18 months at Old Trafford following his move from Arsenal.

The report claims Solskjaer has been told he will have to figure the Chilean international in his first-team plans next season as the club will not be able to get him off the wage bill.

And Solskjaer confirmed in this morning’s press conference that the forward, currently out on loan at Inter Milan, will return to Carrington for training in July.

When asked about potential January transfers, Solskjaer bizarrely mentioned Sanchez and said he will ‘come back in the summer and prove you all wrong’.

Surely Solskjaer is not content with his attacking options at Old Trafford and must be frustrated how he has yet again been completely failed by the board in this transfer window.

It was essential United strengthened in January due to Marcus Rashford’s long-term injury, but it appears Solskjaer will now have to settle for the return of one of the biggest flops in the club’s history.

Hear what Solskjaer had to say on Sanchez below, courtesy of Football Daily:

Ole: "It is difficult in the transfer window. I can’t remember many good deals we’ve brought in in January. Alexis Sanchez will come back in the summer and prove you all wrong.” #MUFC [FD] pic.twitter.com/fR3ekw1l2w

Ole should walk. I’m serious. Those leaching scum are hanging him out to dry.

Bigger fool to put up with it. #GlazersOut

"Alexis Sanchez will come back in the summer and prove you all wrong.”

Ole has officially lost the plot. Sanchez is really going to be treated like a new signing instead of signing players. #MUFC pic.twitter.com/OgndFOlXac

Alexis Sanchez will be back in the summer to prove everyone wrong says Ole.

Roughly translated this means "No one wants him because he's nearly 32, injury prone, past it, a troublemaker and on 400k a week. So we're stuck with him"

Alexis Sanchez, a January 2018 signing, was mentioned to Ole Gunnar Solskjaer in the press conference. “Alexis will come back in the summer and prove youse all wrong," the #MUFC boss said

Ole saying Alexis Sanchez would return to #mufc next summer is up there with the dumbest statement I have heard in my life. What happened to getting rid of deadwoods ?

Haarland , Slimani, Ighalo only to be told that Alexis Sanchez would return to Utd next season… I'm speechless ..

Proving us all wrong? 🤨

It would certainly surprise a few at the club too, if Alexis Sanchez returned to play for United. #MUFC @TheAthleticUK https://t.co/8vkBkal7St

Ole’s getting fucked. He should walk.

If you’re blaming him you ain’t seeing the bigger picture.

Jose got 3 back up players after coming 2nd.

We arent signing replacement for players who’ve gone. We are in DESPERATE need of signings.

They won’t back the next manager either.