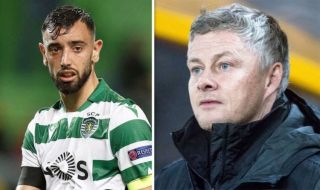 Manchester United appear to be making progress at the negotiation table with Sporting Lisbon.

This month we have witnessed a long and tiresome saga involving Bruno Fernandes’ apparent transfer to Man Utd, leaving Sporting as the best player in Portugal.

The Red Devils appear to be edging closer to their No 1 target for the January transfer window, as per Sky Sports, with United reportedly increasing their offer to Sporting for Fernandes twice in the past 24 hours.

After weeks of negotiations, it looks like the United has reached an agreement with Sporting’s director Hugo Viana which could see United pay an initial fee of €55m plus add-ons that could see the fee rise to €80m.

However, whilst complaining about the wi-fi at Villa park, BBC Sport reporter Simon Stone took to Twitter tonight to provide an update on the Fernandes transfer.

Bruno Fernandes due to have medical in next 48 hours. Man Utd still looking for additional signings but v late now. (Amazing how bad the wi-fi/phone connection is at Villa Park). https://t.co/20H87GG8CD

Stone says the Portugal international is due to have a medical in the next 48 hours. That means Fernandes could be available to face Wolves at the weekend.

There’s more information the tweet that is of interest.

It sounds like United are looking to make additional signings once the Fernandes deal is complete.

We have until Friday 11pm to get business done.