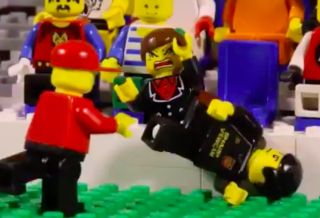 It’s been just over 25 years since Eric Cantona stunned the football world with his infamous kung-fu style kick at a Crystal Palace fan at Selhurst Park.

Cantona was subject to abuse from a supporter in the front row and launched into the crowd with a flying kick in one of the most stunning moments in English football history.

As punishment for the incident, Cantona was banned for the rest of the season and fined the maximum of two weeks wages.

But he was supported all the way by manager Sir Alex Ferguson and he still remains one of the most iconic figures in Manchester United history.

Courtesy of Bands FC twitter account, check out this brilliant Lego recreation of the incident that shook world football.